Have you seen these pictures on Instagram of the breathtakingly-beautiful Hindu temple in Bali, Indonesia? People pose between stone posts with mountains in the background, with a mirror-smooth reflection of themselves coming from a lake below. Isn’t it stunning? Doesn’t it make you want to stop what you’re doing and get on an airplane and fly to Bali right now?

Me too. I’ve been looking at images like these for months now, appreciating how gorgeous the other side of the world can be, and feeling like I’ve just go to go there someday. I mean, look at those pictures! Have you ever seen anything so spectacular in your life?

Trouble is, those photos are faked. Every… single… one of them. Yes, it really is Bali. Yes, it really is a Hindu temple. Yes, those are real stone walls. But that perfectly-still reflecting lake below? It’s a total, utter, and complete fraud.

According to Lifestyle Insider, the reflection that gives such an otherworldly magic to these photos is—literally—a tiny glass mirror held by the person taking the pictures under an iPhone. These photos taken were paid for by the tourists who stood in a line, some for hours supposedly in order to participate in the sham photoshoot.

Do you feel tricked? Confused? Do you wonder how that’s even possible? See for yourself: a writer with Fortune Magazine took a trip to the exact spot, and noted how the site looked completely different in real life.

In case you couldn’t tell, this makes me really mad. Maybe unreasonably so. After all, people can take whatever photos they want, and do whatever they want with their own money. So why do I care? A few reasons:

If you want to see the fraudulent images, view them on Instagram. Otherwise, here’s a a comparison between what people prefer to portray versus what’s real:

On an important note, I do not fault the enterprising locals for coming up with the idea, or for profiting from it. Kudos to them—that’s a totally friggin’ brilliant move.

I do, however, bitterly resent the fact that there’s enough demand for taking inauthentic photos from tourists who want to satisfy their desires to showcase a pretend, online version of themselves and adding #blessed #bestlife #lifeisgood #wanderlust tags.

Seriously: are these people so pathetic that they reason they went to Bali was to take (doctored) pictures? They’re missing the whole point—taking fake pictures to share with people who aren’t there is NOT the point of travel!

Perhaps I’m a bit oversensitive since I know that I would have received an “F” in my photojournalism classes in college if I had ever submitted photos like this in a project. I would have been sternly reprimanded and maybe even kicked out of the program altogether because it’s dishonest to represent reality through photography in this manner.

Yes, again, I know that Instagram is not journalism school. But I also know that professional photojournalists, after school, are held to an even higher standard, and they would be fired from their jobs if they published work like this. And, in this day and age where social media is filled with professional travel “influencers”—people who are literally paid to share their experiences traveling—aren’t they in some sense photojournalists? Aren’t they professional photographers to some extent? Why don’t we hold them to the same standard, or any standard?

This, to me, is an especially egregious example of the dark underbelly of the “amateur” travel industry. Since there are no industry codes of ethics as far as I can tell, a lot of manipulation, post-processing, and ad fraud is slipped into the news feeds and photo streams of unsuspecting fans.

In my opinion, the offline world of photoshopping supermodels for magazine covers is unethical because it makes people (women, especially) feel like crap because they portray an outrageous and unrealistic expectation of beauty.

This is just a digital version of the same unethical behavior, which makes people (like me) feel like crap because it portrays an outrageous and unrealistic expectation of travel.

Seriously, think about the people who went to to Bali and got there, only to discover: “I’ve been tricked!”

This game of extreme sensationalism and deception has got to stop. It will hurt travel, tourism, and travelers in the end unless we demand change.

If you find this content valuable, feel free to subscribe to this blog via email using the form below. You’ll get an email alert each time something new is posted. You can always unsubscribe, of course. 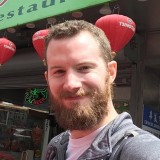 Ron Stauffer is an average American guy with a quiet obsession of exploring the world a little bit at a time. Born and raised in California, he now lives in Colorado and is always looking for an excuse to get away for a few days at a time, living as a part-time digital nomad. He has a degree in Storytelling from Metro State University in Denver, and loves sharing his experiences exploring on the road, in the air, and over the sea. He's visited 30 American states, and he's been to 6 countries... so far!

All content and photos copyright © Ron Stauffer 2008 – 2020, unless otherwise noted.